Buckle Up For Safety!

According to the American Pet Products Association's 2009-2010 National Pet Owner survey, 56% of respondents said they do not restrain their dogs while driving. Another poll cited 62% as the number of unrestrained pets.

This is simply baffling to me. In an age where seat belt laws are the norm for humans, why do we, as pet parents, not realize that our four-legged friends need just as much protection? Maybe its because there are simply not enough affordable canine auto restraining devices. Maybe its a lack of education. Maybe a little bit of both, or a little of some other reason.

PetAutoSafety.com gives us something to think about - Seven reasons why you should restrain your pet in a vehicle:

1) The dog won't be able to distract the person driving the car. Distractions can be very dangerous to the driver. Some dogs are naturally well-behaved in the vehicle, but many dogs have to be trained in car-riding decorum. Why not train them in the pet auto seat belt instead?

2) Sudden unexpected stops won't cause the dog to fly forward into the dash, the back seat, or onto the floor, causing injury. A dog's nose is very sensitive. Hitting their nose on the dash or back of the seat can be a very painful experience.

3) The dog won't be able to put his/her head out of the window. Did you know that even a tiny spec of flying debris can do serious damage to the dog's eye or nose? Many dogs love to put their heads out of the window, but it can be an equally pleasant experience if they are sitting in a pet auto seat belt by an open window. He won't be able to put his head out, but he can still get a whiff of the multiple odors zipping by.

4) Not only will the dog not be able to put his head out of the window, he won't be able to get his body out either. Dogs are instinctive creatures and if something catches their attention, such as another dog, a squirrel, or other animal, they may go after it without a thought. Perhaps your dog is too smart to do this, but why take the chance?

5) Many dogs will run or even bite if frightened. What if you and your pet happen to be in a serious auto accident? Your dog is going to be terrified. If there is a means of escape, the dog may get out of the car and run. And where is he most likely to run? It would be a terrible thing to survive an auto accident only to get hit by a car. Even if there is no way for the dog to escape, he may need medical attention. An injured dog may react defensively by trying to bite someone who is actually there trying to help. A dog that is already restrained, however, is easier to muzzle and therefore, easier to attend to.

6) A pet auto seat belt can actually be quite comfortable once the dog gets used to it. Dogs can have a difficult time laying down in a seat because of the turning, speeding up, slowing down, and stopping movements of the car. Many dogs can brace themselves better by standing or sitting. With a pet auto seat belt, a dog can stand, sit or lay down comfortably and not have to worry about bracing themselves against car maneuvers.

7) Last but not least, a pet auto safety belt shows you to be a responsible and caring pet owner, as well as a responsible driver. Friends and strangers will be impressed with your thoughtfulness and foresight. They in turn may consider getting a pet auto seat belt for their dogs. You can be indirectly responsible for saving another dog's life.

We found wonderful little seat belts that hook directly to our dogs' harnesses. We found them on E-bay for approx. $3 each. It is necessary to note that these should NOT be hooked to your dog's collar - only a harness will do. 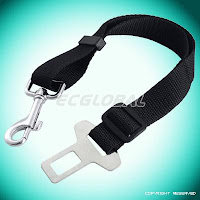 Past Series - Caring For Your Seniors

Past Series - Cooking for Canines

Past Series - First Aid in the Field