West Nile Is Still On The Move 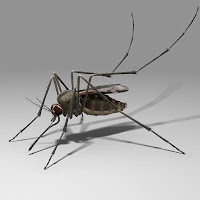 While the threat of West Nile virus to dogs is small, the range of the illness in 2010 spread across the 48 contiguous United States and to British Columbia, Saskatchewan, and Ontario, Canada. Experts consider it to be a seasonal virus that flares in summer and continues into fall, roughly from May to October.

The virus, spread by mosquitoes, causes encephalitis - swelling of the brain. Symptoms in dogs include decreased appetite, difficulty walking and holding the head normally, circling, and tremors, according to the American Animal Hospital Association. However, dogs also may show no symptoms after infection, the Center for Disease Control and Prevention reports. There is no specific treatment, and there is no documented evidence of dog-to-human transmission of West Nile.

No vaccine exists against the virus. The prevention: avoidance. Keep dogs indoors in the early morning and the evening, when mosquitoes are most likely to be out, the AAHA says. Use only mosquito repellent approved for use on dogs - never DEET-based products, which can make dogs ill. Ask your veterinarian for recommendations.

Past Series - Caring For Your Seniors

Past Series - Cooking for Canines

Past Series - First Aid in the Field